I could see my ugliness reflected in the faces of my distraught and sinking children.  I was in danger of souring the day with no chance of recovery.  I could see it all happening and yet I could not stop myself.  Fueled by thriftiness, justice and the desire to be right, I picked a fight at the dark cave.

Phong Nha-Ke Bang National Park, Vietnam is home to massive wet and dry cave systems, one being the largest in the world.  Most of the caves are closed to the public and/or require a guide to enter, we opted to visit only the ones that allow self-touring.  It turns out that only one of two visited actually allowed self-touring.  It also turns out that we wish we had paid to do a more extensive tour, because the caves and jungle were amazing.

The first cave we decided to visit was the dark cave, because it advertised ziplining into the cave, cave exploration and a mud bath.  Believe it or not, this aspect of the adventure was what caught Mia’s eye.  She has a new found appreciation for mud after making mud sculptures and mucking waist deep in a lagoon at Railay beach in Thailand).

We arrived at the dark cave on motorbikes.  Motorbiking into the National park was an activity in itself.  Beautiful primary jungle, very little traffic, freedom of the road.   Mia and I always ride together because she doesn’t like to go fast and I have a comfort speed zone that is just too safe and slow for Porter.  We make a good team.  She navigates and waves at little kids, I drive and try not to get hit by a bus.  Mia and I kept losing our engine on the steep down hills but would just coast to the bottom and fire it up again. The road through the national park was spectacular.  I thought that I had been in the jungle before, but this was pristine, dense, lush jungle.  It feels as though you drink it in like a thick green smoothie.  I hoped that Mia and Porter might absorb some good green nutrients that have been so lacking from their white rice diet. 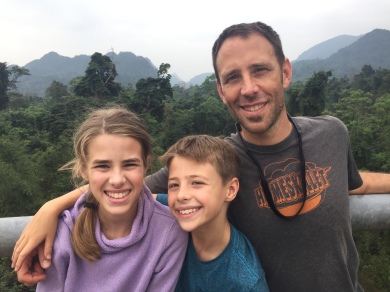 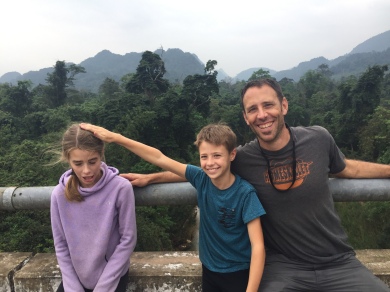 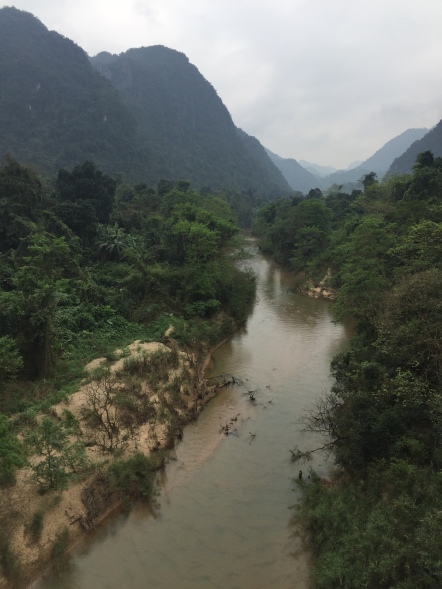 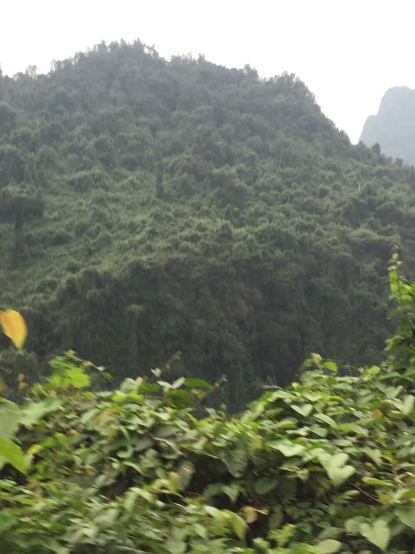 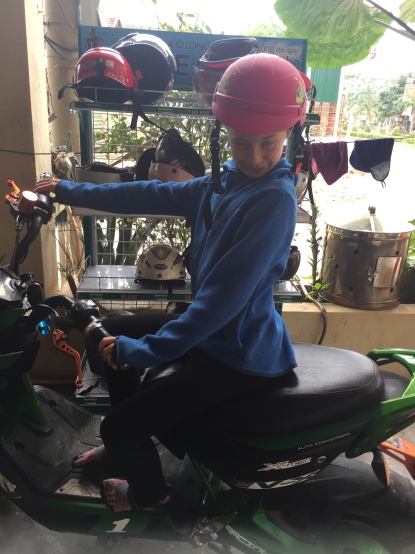 After arriving at the dark cave, the sign up woman at the entrance informed us that the kids would not be able to zipline due to being under 40kg and therefore we would have to kayak to the entrance instead.  This was the first annoyance.  I mildly argued that we had just done the world’s most extensive network of ziplines; we know how to do it, and pull ourselves across if needed.   Porter was especially chuffed not only because he likes to zip but he considers himself a bit of an expert post Gibbon Experience.  Porter has also been feeling generally ignored in Asia.  We call it “adored but ignored.”  Patted, pinched and pet but not really heard.  As I write this, I realize that the Gibbon Experience and Bees were two places that allowed Porter the freedom to learn and discover on his own, he was trusted with responsibility and his needs were heard.  They were also his two favorite experiences of the trip.

I got a little worked up about the no ziplinng and asked if there was a family discount since their rule precluded us all from ziplining.   She said no discount but the kids are half price.  I let it go, felt good about the kid price and knew that a safety rule is a safety rule and not likely to bend.  The sign up woman then waved Mia over to a measuring stick and informed us that she is too tall to get the kid price.  Too light for zipping, but too tall to be a kid.  WHAT?!?!?!?!

I boiled at the injustice.  I let every bit of Vietnam frustration rush to the surface.  I was going to punish this ticket person for my travel fatigue, my disappointment in the food, our encounters with Mr. Angry Pants, the difficult language, the cold weather, my untethered, homesick, and purposeless angst.

“How can she be treated like a child and not get child prices, that makes no sense!” We went back and forth several rounds, I was getting uglier by the minute, she was keeping her composure and a plastered smile, hoping that I would just go away.

Meanwhile, the kids were sinking as deeply into their negative moods as they were into their chairs.  Porter was verbalizing his dislike of this place and “what a rip off.”  We have been trying to limit how much we talk about bigger costs of things as Porter has developed a bit of a money worry while traveling.  His interest in the good deal has morphed into genuine concern that we are going to run out of money.  Even with this knowledge, I could not stop.   I told the kids that I was aware of how I was ruining the experience but it would be over soon and we would be a happy family once again and the cave would be GREAT! (clenched teeth),  BUCK UP everyone! (forced smile).

It is in my nature to be both a rule follower and a rule breaker.  John is always taken off guard when one or the other instinct pops up.   I may not want to jump the fence and face getting in “trouble” but I certainly don’t think that excessive entrance fees apply to me.  Needless to say, this was a rule worth breaking, destroying, obliterating and most definitely not worth following.  I was certain I could break this rule.

And so, I called in the Manager.  A short athletic type with the typical endearing outdoor-rec chummy humor.  His charms worked, I let up and he agreed to ask the “big boss.”

It’s hard to argue the case for Mia being small when she is nearly the height of most grown men – including the manager.  He was quite literally “the little boss.”   I’m not sure the call actually happened, but he did go through the motions.  No discount.  It’s over, I lost, we move on right?  No.  My classic next move when I know I’m losing the battle is to seek validation that although I have lost, “I AM RIGHT!”  A few more rounds, manager has lost his charm, I am utterly defeated.

In the end, I accomplished nothing but souring the mood, accosting a woman and feeling ashamed of my misguided conviction.  I apologized to the family for my behavior and turned on my uber-chipper-make the best of it-attitude.  My family is resilient and forgiving.  Every step away from the check in, moods started to lift.

Kudos to Mia.  Her 28kg skin and bones frame jumped into a cold river, walked into a dark cool cave wearing only a swim suit and headlamp helmet.  Shivering along the muddy passage ways, hands bracing on the muddy walls, entering a cold muddy pool with no shore and no shallow end– not a peep.  When John pointed out that she was really a four-4-four trooper on this day, she responded calmly but firmly, “oh I know, I know….and you owe me some painful shopping days.”

The highlight of the cave was a chamber filled with mud.  Waist high, latte-colored swimming pool with the texture of gritty thick water instantly covered our bodies in a thin layer of creamy brown.  Kinda cool?  Kinda grosss? Kinda mysterious?  Yes, yes and yes.

Porter was of course leading the pack with the guide and entered the pool first.  We had heard that the mud was more buoyant than water but we were all still on our feet and it just seemed like muddy water.  Suddenly, Porter was floating on his back with most of his body out of the muddy water.  He was laughing and shouting with disbelief and delight.  We all tentatively lifted our legs and boing, up to the surface we bobbed, most of our bodies pushed out of the slurry.   It became a giggle fest in the echoey chamber.  Once floating, it was hard to get my legs back under me and my body just kept rolling around on the surface.  Mia and I experimented with the balance point curled up in a ball and paddled ourselves across the pool in this position.

We were the last of the large group to leave the mud chamber.  With the rest of the group out of site down a skinny corridor, six of us paused in the adjacent dry chamber. We turned off our headlamps and stood in silence in absolute, complete darkness.   For me it was at first exhilarating, timeless, and vast.  In the next moment, just before turning on our lamps, a glimpse of crushing panic, thick air, hard to breathe.  John and I looked at each other wide eyed, “did you feel that?”  “I felt it.”

The day ended with John and Porter playing on a series of ropes and small zip lines over the river.  Mia and I shivered our way through a cold shower and dressed in every layer we brought.  Pringles have never tasted sooo good.  We motored home with the setting sun, leaving behind my dark mood.  I could feel a shift happening in my psyche that often comes with unrelenting nature and good old fashioned giggles.

I have included pictures from the national park and Paradise cave, which we visited the next day.  Paradise was discovered in 2005 by a local farmer.  A small opening only a few meters wide, opens into a vast cavern reaching dimensions of 72m high and 150m wide.  It measures 31km in length.  We walked the boardwalk 1 km in.  Although the cave was built up with boardwalks and flood lights and attracted many tourists, it was a wondrous site to behold.

5 thoughts on “The Dark Side of the Cave” 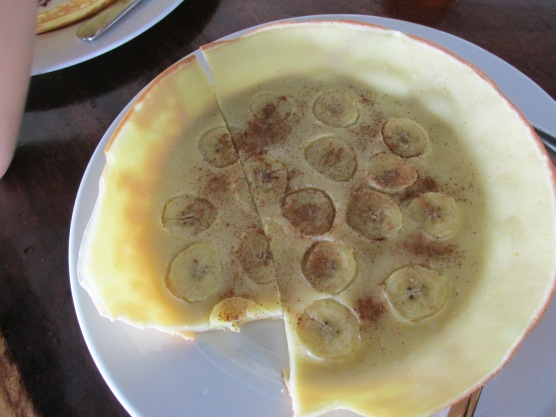 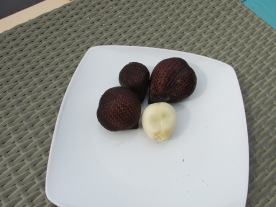 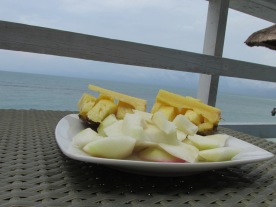 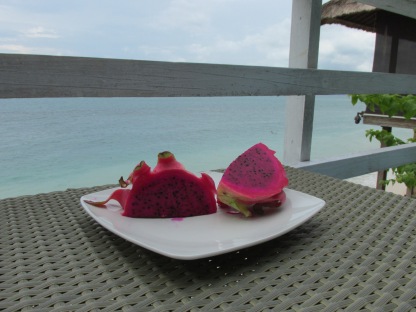 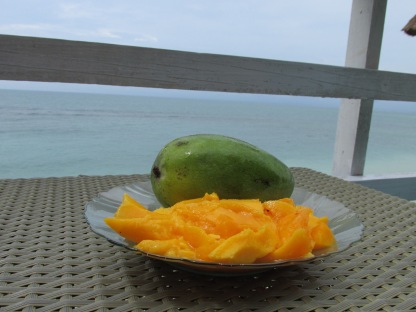